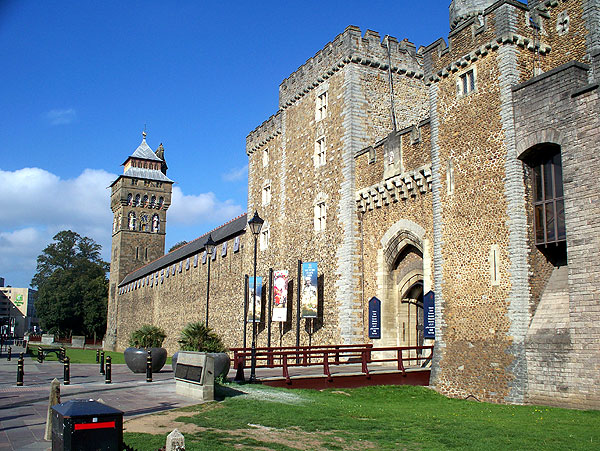 Cardiff Castle as one sees it today is mostly of Victorian construction, but it was founded as a Roman fortified camp. A Norman castle keep on a mound (motte) was built within the walls. A medieval mansion followed. The keep was severely damaged in the English Civil war. The mansion went through various changes and extensions, most notably at the hands of the immensely rich 3rd Marquess of Bute and his architect and designer, William Burges.
Bute also had the perimeter walls you see today re-created on their Roman foundations.
Some of Burges’ work can be seen on the exterior of the mansion, but the full effect is seen inside, where many room interiors can only be described as jaw-dropping, as Burges’ extravagant homage to the medieval period is given full reign.
Only about seven rooms are open to general visitors, and if you pay the £2.50 supplement for a guided tour, you are shown several more, but not the entire interior. In fairness, the typical room contains a vast amount of decorative detail for the eye to take in; a riot of colorful moldings, carvings, wall-painting and furniture.
Asides from the mansion, don’t miss climbing up the keep (if you are fit), and exploring Lord Bute’s tunnel built into his wall and extending around three sides of the site. The tunnel was used as a shelter during WWII and contains WWII relics, plus sound effects. In the cafe, look at a section of original Roman wall.
Despite the size of the site, it’s possible to have a look round it all in about two hours.
If you are travelling by car, you may prefer to use the city’s park and ride. When you get off the bus, ask someone to point you in the direction of the castle.