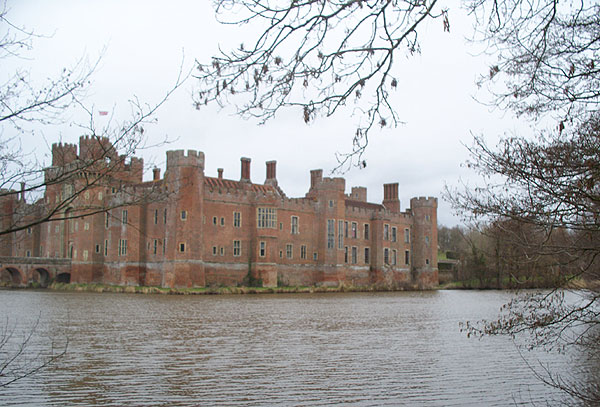 Herstmonceux Castle has a chequered history. It was built in the 15th century as a castle-style palatial residence by one Roger Fiennes, Treasurer to the court of Henry VI. By the 18th Century, the castle was in the hands of Robert Hale-Naylor, who had the interior of the castle dismantled in 1777 on the advice of fashionable architect Samual Wyatt. The contents were sold off, and other materials used to build a new mansion, designed by Wyatt, nearby. The outer walls remained as a romantic ruin till the 20th century.
Radical restoration work was started in 1913 by Colonel Lowther and completed for Sir Paul Latham by the architect Walter Godfrey. Despite appearances, everything visible from the inner courtyard is 20th century work.
In 1946 the castle and estate passed into the hands of the Admiralty and by 1957 was the home of the Royal Greenwich Observatory, with the castle being used for accommodation and the grounds housing various telescope domes.
By the 1970s the Observatory had moved out and in 1992 the castle was bought by Queens University of Canada with funds provided by Alfred Bader. In 1994 the Queen’s International Study Centre opened.
The most striking thing about the castle is its size – it is one of the biggest brick-built castles in England and one of the largest early brick-built structures.
The grounds and gardens are normally open to the public, and on some days a guided tour of the Castle is available at extra cost. (Pay at reception in the Castle). It is worth taking the tour, as you will see much of the ground and first floors, as well as the courtyard. The interior contains various bits of architectural salvage from older houses.
The gardens and woods are also worth exploring.

If visiting the castle by car, it is recommended that you do not use postcode navigation, but instead navigate to Bradley Road, Herstmonceux or to the Wartling Road running northward from the A27 at Pevensey.
The only public entrance, shared with the Observatory Science Centre, is off the Wartling Road. The ticket hut for the castle grounds is opposite the Science Centre.