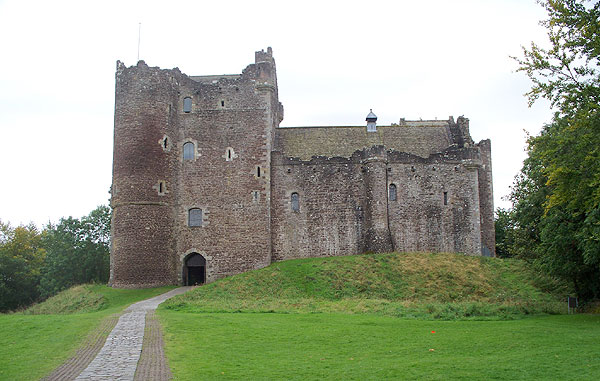 Historic Scotland
Doune castle was built in the late 1300’s by Robert Stewart, 1st Duke of Albany, Earl of Monteith and Fife. Albany was younger brother of the ineffectual Robert III, and was ruler of Scotland in all but name from 1388 until he died in 1420.
The castle is situated in a naturally strong position on a wooded river bend.
The castle today comprises the gatehouse tower, great hall, kitchen tower and curtain walls around the central courtyard. There appear to have been at one time other buildings occupying much of the courtyard, but the nature and function of these is now conjectural.
By the 1850’s the castle seems to have become a roofless shell, but a restoration was carried out in the 1880’s.
The towers and great hall all have vaulted storage chambers at ground level. At first floor level the kitchen tower has the great kitchen, and an irregularly shaped servery. Stone-floored rooms survive above the kitchen.
The great hall was restored in the 1880s and the roof and some other features date from this period.
The first floor chamber of the gatehouse tower is known as the Duke’s Chamber. The present interior finish dates from the Victorian restoration. The room has an unusual double fireplace.
On the floors above are a small mezzanine chamber and further up another small chamber leading to the second-floor hall. This is now open to the roof, though clearly there was a third floor of wood, which has not been re-instated.
It is possible to exit onto the battlements, for a great view of the River Teith and country below.
The castle is well worth a visit. Some will be interested to know that it was used as a location for the movie “Monty Python and the Holy Grail.”
Thumbnails:

One thought on “Doune Castle, Scotland”