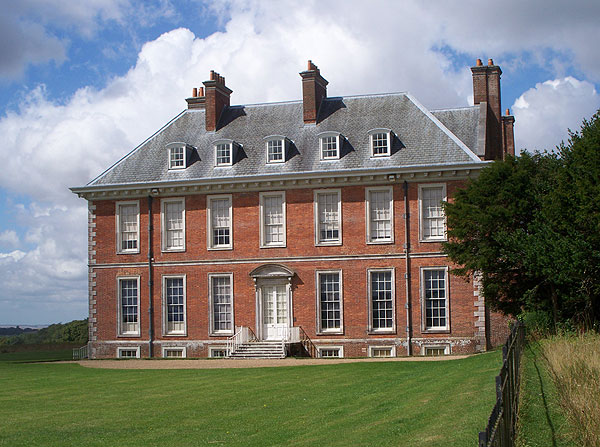 National Trust
Uppark is a Queen Anne style house and garden standing on a hilltop. It was built largely in its present form in the late 17th century. Some remodeling took place in the 18th and 19th century. It is a handsome house, and has some fine principal rooms with original contents. The gardens are attractive, and there are some interesting tunnels under the forecourt which connect the house with the stables and former kitchen outbuildings.
Uppark is known nowadays partly for the disastrous fire which occurred in 1989. The fire was started by heat from a workman’s blowlamp, and not discovered till it had taken hold in the roof. Firemen arrived promptly but were unable to halt the progress of the fire which destroyed the roof and upper floors and damaged the principal floor. The portable contents of the principal floor were rescued by firemen and volunteers before the upper floors fell into the principal rooms.
The decision was made to restore the house to its condition before the fire. The reconstruction was an epic of restoration. Today, the principal (ground) floor looks much as it did before the fire and is furnished with most of its original contents.

One thought on “Uppark, West Sussex”