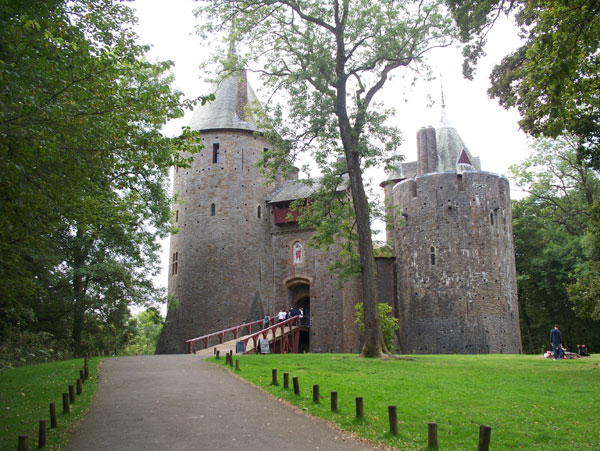 CADW
Castell Coch was built for the immensely rich 3rd Marquess of Bute, who employed William Burges as his architect and designer. They conceived the idea of rebuilding the ruined medieval Castell Coch and fitting it out with a stylish Victorian interior. Work went on from 1875-91. Burges used the stumps of the original towers and curtain wall, but above that level used his own imagination. In particular, the striking conical tower roofs cannot be references to any original British roofs.
Two of the towers are fitted out as a lavish country home and banquet venue, while the third tower, with a plainer interior, was probably used to accommodate servants. There is no guest accommodation, and it seems that the completed castle was rarely used.
The first sight of the castle, with its unequal round towers and pointy roofs, is pure Disney :-). The internal courtyard, with its covered walkways, may not strike visitors as being particularly medieval, though such features were known in the medieval period.
Indoors, the banqueting hall with its painted walls and ornate barrel boarded ceiling is an impressive room. Next door is the vaulted and multi-sided Drawing Room, probably the finest room in the castle. Above the fireplace is the ‘Three Fates’ a brightly coloured piece of statuary. The lower parts of the walls are paneled. Above that the walls are painted with a design of various animal fables. Above that are galeried recesses, and above them the vault with birds and stars.
Another impressive room is Lady Bute’s Bedroom, a large rounded room surmounted by a mirrored dome. In the lower part the decoration is Moorish, while in the dome the five rows of painted panels of plants and animals suggest the Aesthetic movement.
Also of note are Lord Bute’s Bedroom and the children’s room.

I would suggest visiting Castell Coch followed by the more extravagant Cardiff Castle. It is possible to look around Castell Coch in an hour and a half, so it is easily possible to visit both in one day.
If arriving by car from the south or east, the route involves going up the busy A470 dual-carriageway, coming off at a roundabout and then going south again on a parallel road before passing through the village of Tongwynlais. If using a sat-nav, do not turn right into Catherine drive from Castle Rd – the castle entrance is nearby on the left.

One thought on “Castell Coch, Wales”