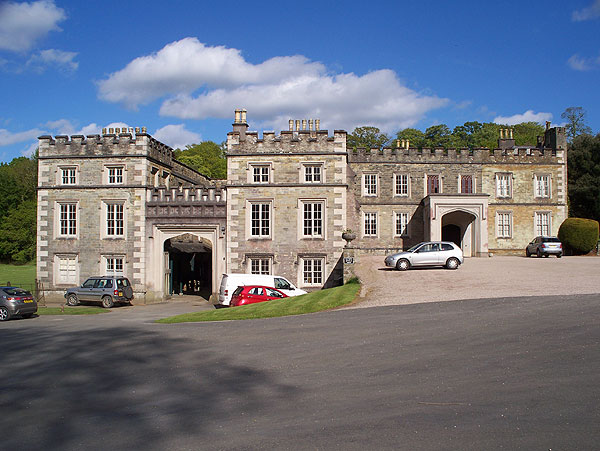 Privately owned
A grand house and grounds near the Saltash estuary. Parts of Port Eliot are extremely old – there are fragments dating from the 4th, 9th, 10th and 13th centuries, but most of the house dates from a makeover by Sir John Soane in the 18th Century. It was previously known as Port Priory. The estuary water used to be closer, but was diverted by a dam in the 18th century.
A notable feature of the contents is a series of family portraits by Sir Joshua Reynolds. They belong to the Plymouth City Museum and Art Gallery, having been accepted in lieu of death duties, but remain in the house on condition that they are available for viewing on 100 days per year. There are a number of fine rooms with contents including valuable furniture – the Morning Room, Drawing Room (library), Big Dining Room and the Round Room. I don’t recall seeing the Conservatory annex.
The Round Room was designed by Sir John Soane and is considered one of his outstanding achievements. It is painted with a 20th century mural by eccentric artist Robert Lenckiewicz, which is regarded as his masterpiece. It depicts dozens of people known to the Eliot family and is an outstanding work. In the same room is a Harley-Davidson motorcycle, restored and presented like an art exhibit.
A look on Google Satellite makes the house plan, with its two almost separate blocks, clearer.
I found that all the house guides (stewards) were knowledgeable and enthusiastic. The house is still a family home, and visitors may see family possessions lying around – and the family dog. There are extensive grounds, which I did not have time to fully explore.
Visiting – the house is about 200 yards north of St Germans village on the B3249. Approaching from this direction you will come on an entrance with gateway and lodges forking to the right, at a small car park. The pedestrian entrance is here. You could park here and walk down past the church, as the house (behind the church) is much closer than it looks. I’m still not sure what they expect car-borne visitors to do – apparently there is another entrance and car park 1Km further on, to the west, which you’d come on first if approaching from the A38. I visited on a day of low visitor numbers (they do have an annual literature festival), and not finding anyone to ask, I drove through the gate and parked in front of the house. There was plenty space and nobody objected.
Important Notice: The owner of Port Eliot is in negotiations to sell the house to a trust run by Prince Charles. The implications for visitor access are unclear, but the interior will no longer look like a family home. As with privately owned mansions in general, the message is: Visit It While You Still Can.
For interior photos see Port Eliot website.

One thought on “Port Eliot, Cornwall”