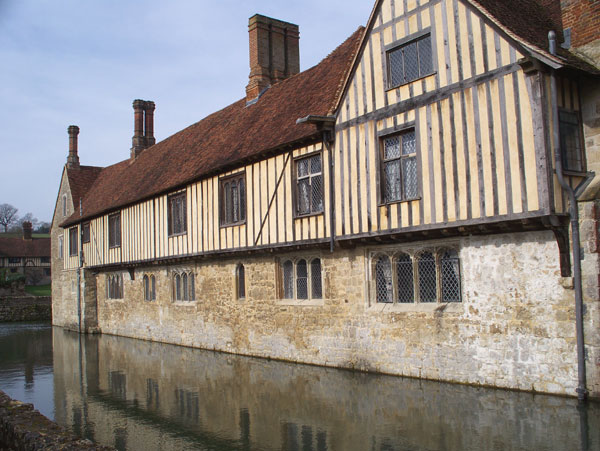 National Trust.
Ightham Mote (pronounced I-tam) is a medieval manor house that has survived for over 650 years in a valley in the Weald of Kent. It is entirely surrounded by a moat of running water, fed by a stream that traverses the gardens. The various owners were wealthy but not famed, and made modest changes to the house to adapt it to their needs and tastes. Much of the present outline of the house was in place by the 16th century. The house, with its cream stone and jumble of red-tiled roofs, sitting in a square moat, is very attractive.
If one stands in the central courtyard and looks around, it may look as if the house is of one piece and date, but in fact it is the product of six centuries. The earliest parts of the house date from the 1330s while other parts were built or altered at times from the Tudor to Jacobean to Victorian. The last owner bought the house in the 1950s and some rooms are presented with the decor of this period.
The house suffered sales of its entire contents on more than one occasion, and is presently furnished with furniture appropriate to the periods in which the rooms are presented.
Above the house to the north is a lawn and informal grounds, while to the west are a formal garden and some cottages on the site of the former stable block.
From 1990 to 2004 the house underwent a major programme of conservation during which much of the roof and timber-framed rooms were dismantled, and rotted and infested parts of the timbers cut out and replaced with new wood, before the whole was reassembled, so that the house now looks the same as before, but no longer crumbling. Hence most of the lath and plasterwork in the house is modern. On the other hand, without these repairs and also the repairs carried out in the Victorian period, parts of the house would have eventually fallen down. The conservation programme cost around £11 million.

Ightham Mote is well worth a visit, as it has some fine interiors and is one of the best moated medieval houses in the country.
Note that the approach to the house is along narrow roads.