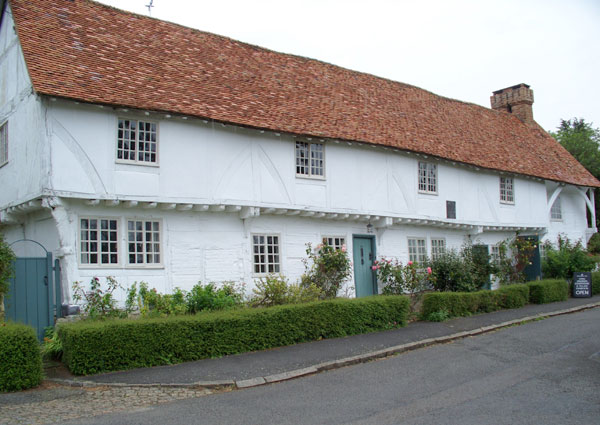 National Trust
The timber-framed Courthouse dates from the 15th century, and was used for legal meetings of the three manors into which the surrounding farmlands were divided, and later for other purposes. In the 1890’s it was derelict and under threat of demolition when it became the second property acquired by the nascent National Trust. For a time one of the radical founders of the trust used it for residential workshops for poor boys from the cities, to broaden their minds and foster comradeship between boys and men. After a dispute, the building was re-dedicated to more conventional use, and today the ground floor is let out as accommodation and the upper floor houses a village exhibition.
In the 1980’s the building was (again) refurbished to remove some of the heavy brick infill from the walls and replace the brick with lightweight synthetic panels.
The Courthouse is worth a visit if you are in the region, to see the exterior and the interior, and the exhibition. For no obvious reason, the Courthouse is only open for three days a week in season, plus bank Holidays. Visitors are advised to phone to check availability before travelling a long distance. Allow time to stroll around the village and see many other timber-framed buildings which look as old as the Courthouse.