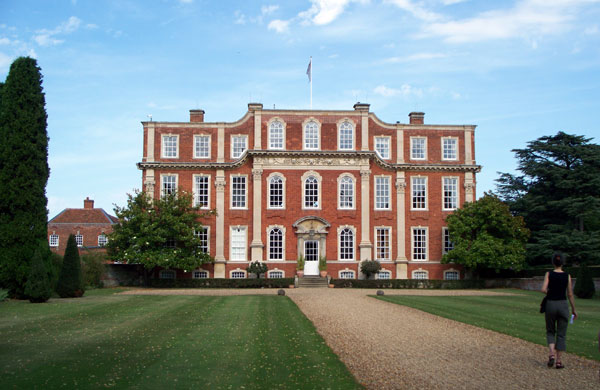 Privately owned, limited access.
Chicheley Hall is an early Georgian mansion built in 1719-23. It was owned for centuries by the Chester family, some of whom are buried in the nearby churchyard. From 1954-2009 it was owned by the Beatty family, Earl Beatty being the son of the famous WWI admiral. It is now owned by The Royal Society, who have spent many millions of pounds on renovating the Hall and turning it into a conference centre.
I remember visiting the house when it was open in the 1980’s and seeing some Beatty memorabilia, but no Beatty relics now remain in the house. The ‘uneven floors and creaking corridors’ are also in the past. In Sept 2012 I was able to visit the Hall via a guided tour as part of the national Heritage Open Days event.
Inside, the restored double-height entrance hall is impressive. On the ground floor a set of three panelled rooms have been restored to a high standard. There is high quality wood-carving in various places. On the first floor are some public rooms. The second floor is devoted to bedrooms including one with a carved panel from the previous house, and another with a Latin inscription, as well as a room lined with built-in cupboards in dark wood (presumably the ‘secret library’ referred to in some descriptions.)
Outside the approach front is the most impressive view of the house, followed by the lake front, while the garden and service fronts are more utilitarian. There are two service wings now used for guest bedrooms, the north wing being linked by a curving corridor.
According to the Chicheley Hall website, non-corporate visitors can visit the Hall by arrangement and have a cream tea etc. You should contact them for details.
The estate has 75 acres of land, which includes several acres of pleasant gardens around the house.