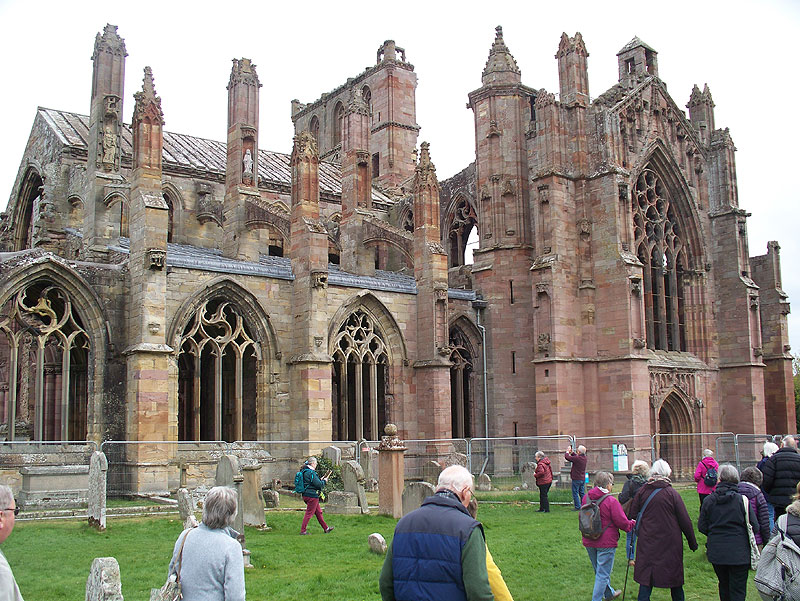 Historic Scotland
Melrose Abbey was founded in 1136 by Cistercian monks, but was largely destroyed by Richard II’s invading army in 1385. What remains today is largely a result of the subsequent rebuilding. It was still unfinished in 1504, and badly damaged by Henry VIII’s invasion of 1544. It appears that the nave was never finished. The Protestant Reformation took place in 1560. Subsequently the monk’s choir part of the church was adapted for use as a parish church, with added walls. A drawing of 1800 shows a roofless nave. In 1810 a new parish church was built in the town, and the abbey fell out of use.
Today the choir, transept and presbytery remain to full height while the monastery buildings remain only as foundation walls.
In 1822, Sir Walter Scott supervised extensive work to stabilise the ruins.
The interior was inaccessible when I visited due to concerns about unstable masonry. The outside of the choir, transept and presbytery on the south side are of particular interest because of the numbers of medieval carvings of gargoyles and other figures, including a bagpipe-playing pig.
Across a lane is a small museum in the ‘Commendator’s House’ containing carvings and other fragments found on the site.
Nearby are two small gardens curated by the National Trust for Scotland. 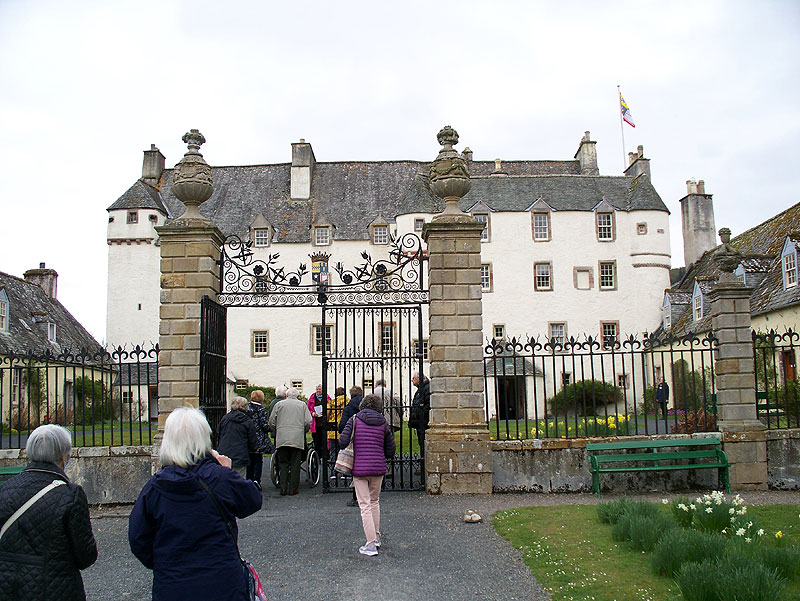 Privately Owned
Traquair is said to be Britain’s oldest inhabited house. It existed in 1107 and has been extended since then. The lower side wings were remodelled in 1695-1699. The house was used by various Scottish kings and has a long association with Jacobites and Catholicism. Mary Queen of Scots stayed here and one can see her bed and the cradle in which she rocked the infant James.
A number of rooms on several floors are opened to visitors, containing period furniture, artifacts and facsimile documents. The High Drawing Room has recently rediscovered painted beams exposed in the ceiling. On an upper floor there is a large priest’s room with a concealed spiral staircase leading down. There is a lot to look at inside the house.
The Dining Room and Lower Drawing Room are in one of the wings, built 1694. In the other wing are the post-Catholic emancipation chapel, the brewhouse, exhibitions and the shop. In the grounds are a walled garden, woodland walks, a menagerie, a maze and a pond, formerly a loop of the Tweed river.
I did not have time to explore the grounds.
There is a lot to see here, so you should schedule a longer visit.