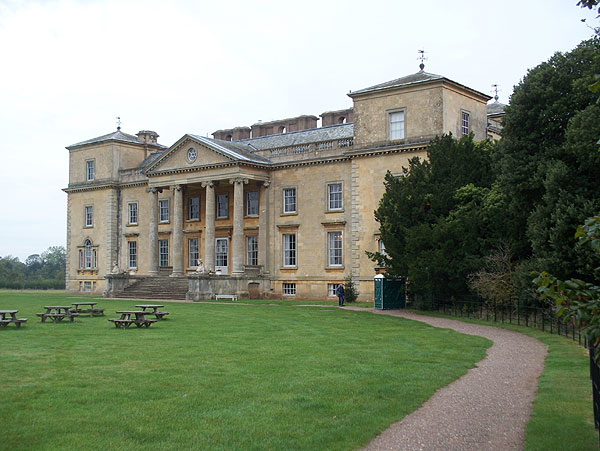 National Trust
Croome largely represents the vision of a single man, George William, 6th Duke of Coventry. The site was originally boggy land. Lancelot ‘Capability’ Brown was responsible for the landscape and for the remodelling of the house – his first commission. Robert Adam designed a number of room interiors.
A walk (or route march) around the estate brings one past many features of this created landscape. First the church, constructed as an eyecatch after the previous church, judged too close to the house, was demolished. Then an ice house hidden in the wood. Then the walled garden, privately owned and only open at certain times. The Rotunda stands on a rise and forms a viewpoint for the house and several distant eye-catchers.
The house stands in the middle of the park. Nominally, all four floors are open to visitors but when I visited some rooms were closed for repairs and I did not get any guided tour to the top floor. The guidebook floor plan marks part of the Red House extension as open to visitors but the shortform leaflet didn’t and this wing was closed for repairs.
The rooms are mostly empty or used for exhibitions, the original furnishings and contents being elsewhere or lost in a warehouse fire. The Long Gallery has impressive plasterwork, apparently recently restored. The Dining Room plasterwork was colourised by the Kirshna movement when they were in occupation of the house. It looks great, but purists may not agree. Also in this room is a display of some of the Croome china, well worth seeing.
Above, the rooms mostly look unrestored. The Chinese Room has lost its plaster ceiling. Some fell down and the NT removed the rest for safety. Two rooms contain the last private owner’s bathroom fittings, retained by the NT as part of the ‘history of the house’. Personally I think they look awful and should go.
Moving on, a reconstructed Chinese bridge spans the river giving access to more parkland. A hard path leads on to the lake with various monuments, the Grotto with statue of Sabrina, and the Temple Greenhouse. Finally one returns to the church.
At the estate entrance are some black huts which house the reception, shop, and tea-room. The huts are one of the few remnants of RAF Defford, an airfield used during WWII for development work on radar. In another of the huts you will find a very interesting museum and exhibition of RAF Defford and its work.