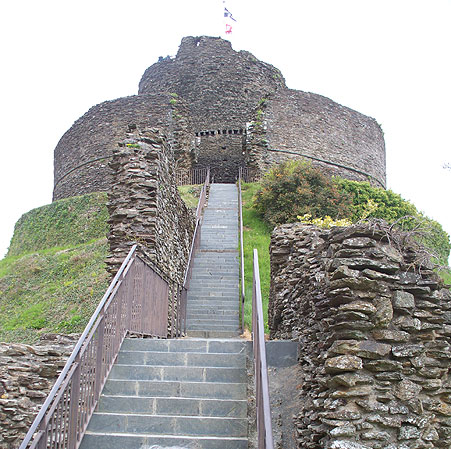 English Heritage
Originally a Norman castle, the castle was rebuilt in stone in the 12th century, and substantially rebuilt by Richard of Cornwall from 1227, including a high central tower inside the circular wall on top of the mound.
Richard’s son moved the administration elsewhere and the castle became partially disused and ruinous. Parts continued to be used for assizes and a prison. It was occupied during the civil war and afterwards stripped for building materials. Parts were used as a prison till 1842, and the site was used as a base during WWII.
The outlines of buildings in the lower bailey can be seen in the grass. Parts of the keep and walls still stand, and the inner tower can be climbed.
The castle is well worth a visit if you are in Launceston.
The castle is on an elevated site in the middle of the town. Parkng is available in pay car parks.