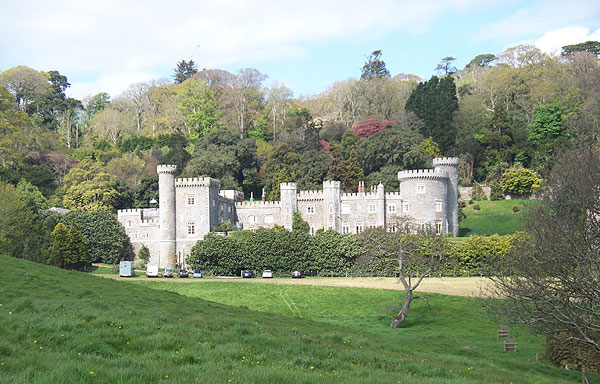 Privately Owned
Caerhays Castle is situated near a beach not far from the village of St Michael Caerhays, south of St. Austell. The castle was designed by John Nash and built in the Georgian period. Its owner went bankrupt and to pay creditors the contents of the house were dispersed in a great auction, and even the lead from the roofs was sold, leaving the building derelict. Some decades later the wreck was bought by the Williams family who restored it, giving it Victorian interiors and starting to create the gardens. The gardens contain plants imported from various parts of the world, including rhododendrons, camellias and azaleas, which make a fine show in the spring.
From a distance, the castle looks as if it contains a vast number of rooms, but Nash’s castellated design conceals various service courtyards so the number of habitable rooms is in fact more modest.
Parking is in the beach car park and there is a stiff walk up to the house (except for disabled, who can park at the house). Caerhays is accessed through a maze of minor roads.
The house contains some fine interiors, including a circular (tower-shaped) drawing room. Admission to the house is by conducted tour and as numbers on the tours are limited, booking well in advance by telephone is advised. The gardens are a major attraction and well worth a visit. Note that the house opening dates and garden opening dates are not the same.