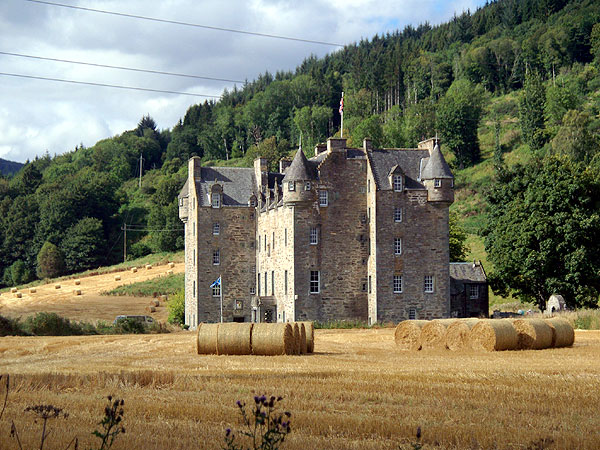 Private Trust
Castle Menzies (pronounced ‘Mingis’) was built in the 16th century (exact date unknown), possibly on the site of an older castle.
In 1577 the upper storey and roof were altered, adding the series of dormer windows with their elaborate pediments. This completed the construction of a Z-plan house, representing a transition between a fortified tower-house and a mansion.
Despite the domestic features, the house was involved in conflict in 1646, 1715 and 1746.
In the early eighteenth century a new block of apartments was built against the north (rear) side of the main block and the west side of the north tower. A new entrance was made in the middle of the main block. This block was deemed unsalvable in the 1970’s (riddled with dry rot) and subsequently demolished. Marks of its former presence can be seen at the rear. Pictures of the vanished block can be seen on the Canmore website: http://canmore.org.uk/site/25670/castle-menzies and in particular
http://canmore.org.uk/collection/1461079 showing the rear in 1942.
In 1840, another wing was constructed on the west side of the main block. This block still stands today.
On approaching the castle, its striking appearance immediately marks it as a classic Scottish castle. It stands unfenced in open fields, in front of a high escarpment.
The castle was acquired by the Menzies clan in 1957 in a greatly dilapidated condition. Since then the 16th century building has been restored with, it would seem, rather limited resources, followed by the restoration of the 19th century wing.
The ground floor consists of vaulted chambers including a kitchen. On the first floor of the main block is a great hall, panelled and with a plaster ceiling, and a withdrawing room with a fine pendant plaster ceiling.
On the second floor are two more large rooms with plaster ceilings.
The third floor is now an attic-like space open to the pitched roof. There are many other smaller rooms (the total for the castle is about 70).
In the 19th century wing, the first floor hall (Dewar Room) is the only room of note open to visitors.

The castle with its many rooms, some elegantly restored, is a fascinating place to visit. Various objects are identified by handwritten labels, which gives the place a dusty charm quite different from the high-budget National Trust for Scotland or Scottish Heritage properties.
Thumbnails: