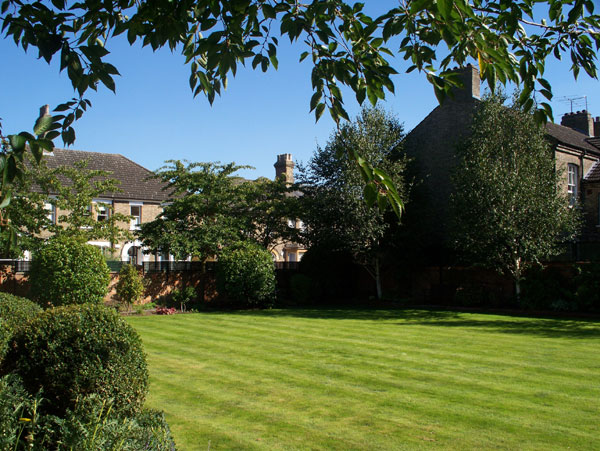 Society grounds (above)
The Panacea Society was founded in 1919 by Mabel Barltrop, the widow of an English clergyman. The Society believed that she was a modern prophet and that a millennial event bringing in a thousand years of peace and happiness would soon occur. The members were inspired by the writings of Joanna Southcott, a prophetess living about 100 years earlier who predicted a messiah would begin the millennium in England.
The Society was best known some decades ago for its national advertising campaigns to open ‘Joanna Southcott’s Box’. The property at Bedford included accommodation for 24 bishops at a high-profile opening ceremony. The Bishops of England declined repeated requests to attend a three-day ceremony of box opening.
Another activity of the Society was the distribution of materials for making holy water – an universal panacea.
In the inter-war period there was an active community of Society members at Bedford taking part in religious services, but nowadays the main activities of the Society seem to be maintaining the Museum and administering a substantial portfolio of property and assets bequeathed to the Society by deceased members.

The Museum site, discreetly located in Victorian villas at the centre of Bedford near the Castle site, contains the Founder’s house, the Bishops’ accommodation, the Chapel and gardens.

The Founder’s House has been arranged as it was in the 1930’s, with much of the original furniture. The contents reflect late-Victorian and Edwardian fashions.

The larger building, Castleside, was intended to be used for the box-opening. Most rooms are now used as exhibition spaces, but a few are fitted out to represent their original functions: a sitting room, a bedroom, a bathroom, and the box-opening hall.
Thumbnails: