National Trust
Croome largely represents the vision of a single man, George William, 6th Duke of Coventry. The site was originally boggy land. Lancelot ‘Capability’ Brown was responsible for the landscape and for the remodelling of the house – his first commission. Robert Adam designed a number of room interiors.
A walk (or route march) around the estate brings one past many features of this created landscape. First the church, constructed as an eyecatch after the previous church, judged too close to the house, was demolished. Then an ice house hidden in the wood. Then the walled garden, privately owned and only open at certain times. The Rotunda stands on a rise and forms a viewpoint for the house and several distant eye-catchers.
The house stands in the middle of the park. Nominally, all four floors are open to visitors but when I visited some rooms were closed for repairs and I did not get any guided tour to the top floor. The guidebook floor plan marks part of the Red House extension as open to visitors but the shortform leaflet didn’t and this wing was closed for repairs.
The rooms are mostly empty or used for exhibitions, the original furnishings and contents being elsewhere or lost in a warehouse fire. The Long Gallery has impressive plasterwork, apparently recently restored. The Dining Room plasterwork was colourised by the Kirshna movement when they were in occupation of the house. It looks great, but purists may not agree. Also in this room is a display of some of the Croome china, well worth seeing.
Above, the rooms mostly look unrestored. The Chinese Room has lost its plaster ceiling. Some fell down and the NT removed the rest for safety. Two rooms contain the last private owner’s bathroom fittings, retained by the NT as part of the ‘history of the house’. Personally I think they look awful and should go.
Moving on, a reconstructed Chinese bridge spans the river giving access to more parkland. A hard path leads on to the lake with various monuments, the Grotto with statue of Sabrina, and the Temple Greenhouse. Finally one returns to the church.
At the estate entrance are some black huts which house the reception, shop, and tea-room. The huts are one of the few remnants of RAF Defford, an airfield used during WWII for development work on radar. In another of the huts you will find a very interesting museum and exhibition of RAF Defford and its work.

I visited four Cotswolds villages: Broadway, Bourton-on-the-Water, Bilbury and Tetbury. They all have buildings in Cotswold stone, and some have a stream running through, expensive shops and art galleries, and a host of restaurants and tea rooms.
Pilbury has a row of picturesque row of weavers’ cottages built in local stone and owned by the National Trust. They are probably the most photographed cottages in England.
Tetbury has an interesting Georgian-period church – St Mary the Virgin. 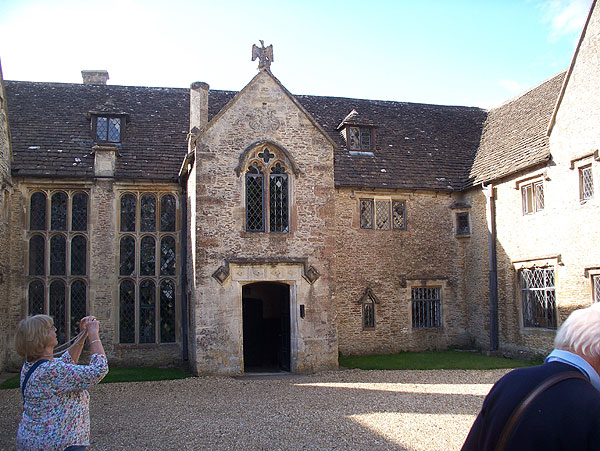 Privately Owned
The core of Chavenage house dates from the 16th century, with additions in the 17th century and early 1900’s. The tour takes in the oldest rooms of the house, which have many original and interesting contents. The Chapel (restored and altered in 19th century) is also worth seeing.
Cromwell slept in one of the bedrooms.
Chavenage retains the atmosphere of a family home, and the family do not employ any staff for opening the house to the public. The tours conducted by George Lowsley-Williams or his sister Caroline are immensely entertaining and informative.
The house is frequently used as a film location for films and TV series, e.g. Poldark.
The grounds can be visited but are unremarkable. 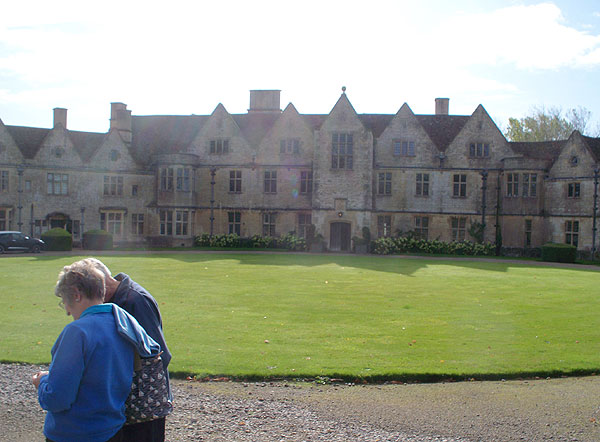 Privately Owned
Despite its Jacobean appearance, Rodmarton Manor was built in 1909-1927 for Claud Biddulph and his wife. The project was much influenced by the Arts & Craft movement, and was built by hand using local labour and materials. The furnishings were made by craftsmen in Arts & Craft style, and remain in the house.
The interior design and furnishings are of particular interest.
Outside are various sections of garden – a pleasant terrace garden behind the house, and to one side a hedged long walk with fine borders, and a large kitchen garden, partly laid to lawn.
Well worth a visit, particularly for Arts & Crafts enthusiasts. 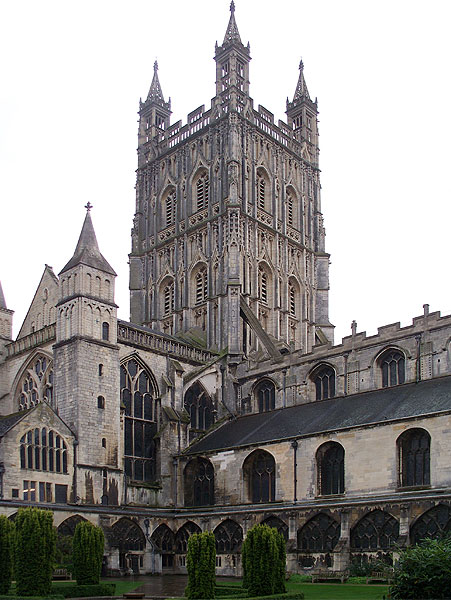 The cathedral was founded in Norman times, as can be seen from the massive round nave pillars topped by round Norman arches. Various alterations and additions were made in the medieval Gothic period.
The fine lattice stonework on the tower can be seen from afar. Close up, the size of the building both inside and out is impressive. The East window, one of the biggest such windows in England, is vast. There is a complete cloister roofed with vaulted and densely carved stonework. The Lady Chapel is very large, and decorated with stained glass and carved stone.
Everywhere one looks in the later built parts is a riot of carved stone, and carved woodwork in the choir.
Also don’t miss the cathedral library, up two flights of stairs.
The cathedral is not to be missed if you are visiting the city.
Admission for the irreligious is “by donation” (suggested donation £5). Conducted tours are available. 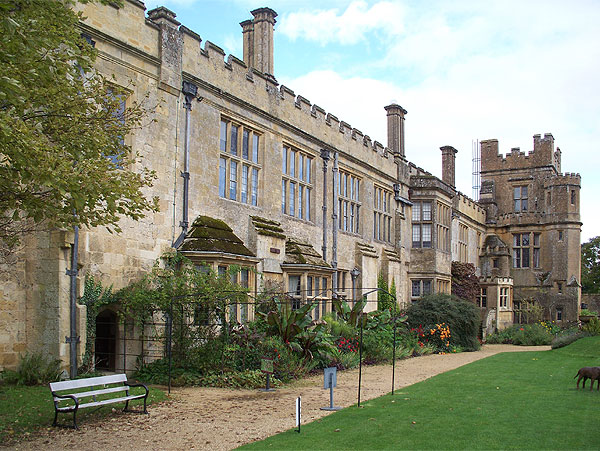 Privately Owned
There has been a castle at Sudeley since Norman times. Parts of the present castle date from the 15th century. The castle was fought over in the English Civil War and afterwards was partially demolished by the Parliamentarians, leaving it as an uninhabitable ruin. In 1837 the picturesque ruin was bought by two wealthy industrialists, the Dents, who restored most parts of the castle as a Victorian country house. Richard III’s hall was left as a picturesque ruin.
Detached from the house is an interesting chapel, also restored in the 19th century.
Many historic names are associated with Sudeley, including Richard III, Henry VIII, Queen Katherine Parr, Lady Jane Grey, Elisabeth I, and George III.
Various rooms are open to the public, but most of these are exhibition spaces. The ‘Castle Rooms’ contain some furnished rooms with interesting contents.
In the grounds are lawns, formal and informal gardens, and an aviary with a collection of exotic pheasants. The grounds are well worth a walk around the circuit. 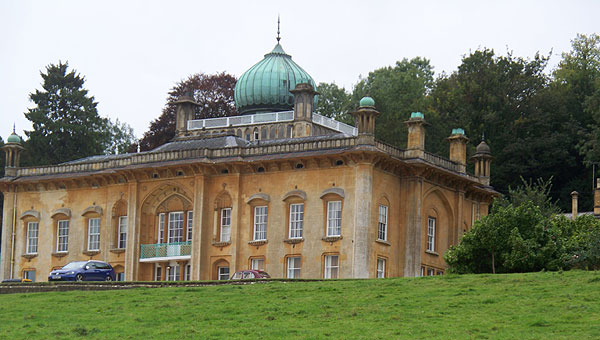 Privately Owned
Sezincote was built in 1805-1807, for Charles Cockerell, brother of John Cockerell who bought the estate in 1795. Both brothers had served in India. Charles appointed as architect another brother, Samuel Pepys Cockrell, to build a house in the Indian manner. Externally the house contains both Mogul and Hindu elements. The stable block partly visible beyond is also built in an Indian style, and various Indian-style sculptures can be found in the grounds: bulls on the entrance bridge, a 3-headed snake, and a pair of elephants.
The interior of the house is in a Greek Revival style. The principal rooms are on the first floor. The rooms on display are well furnished and finished. The central staircase under the dome is of ‘flying’ design, supported by curved cast-iron arches.
The house has two wings leading to pavilions, one being a curved conservatory and the other containing extra accommodation and ending in a pavilion where Charles Cockerell slept in a tent.
Apparently the house was in poor condition by the time the next owners, the Kleinworts, bought it in 1944. The interiors have been redecorated and restyled fairly recently.
There are sloping informal gardens around a stream near the entrance gate, and formal gardens at the far side of the house. The gardens are very attractive and worth a walk around. 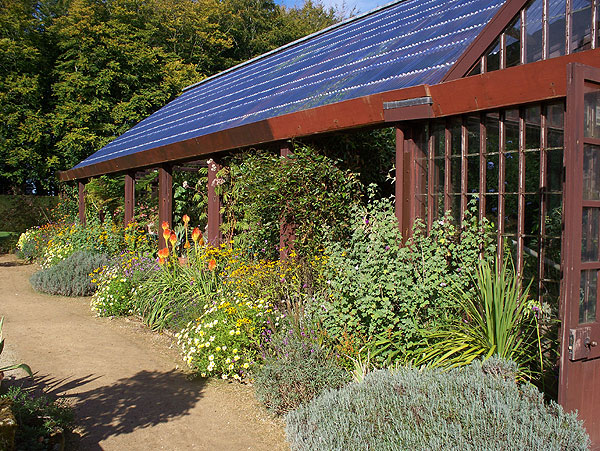 National Trust
The glory of Hidcote is the series of gardens, the house being small and not of particular interest.
I started my tour by heading for the kitchen garden, which as well as the inevitable vegetables contained some attractive swathes of tall flowers. The rest of the gardens follow Arts & Crafts principles, being arranged as formal garden ‘rooms’ near the house with a more naturalistic style in the outer reaches. The outer parts include a Great Lawn and a Long Walk.
The creator of the garden, Major Lawrence Johnson, acquired the house and estate in 1907. Johnson had a serious interest in plants and plant collecting.
The estate is well worth a visit if you are interested in gardens. It is possible to walk round everything in under 2 hours. 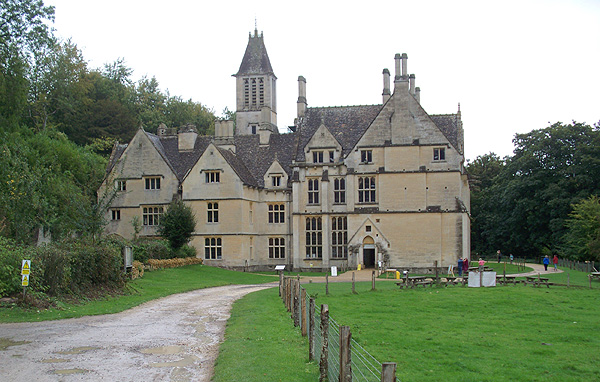 Private trust The mansion is managed by a private trust, while the grounds are managed by the National Trust.
The construction of Woodchester Mansion, a Gothic Revival house, was commenced around 1856 and abandoned around 1870. The house was never completed as the family ran out of money and heart for the project. Externally the house looks complete with roofs and windows in place, but internally floors are missing and walls and vaulting are unplastered allowing the underlying structural elements uniquely to be seen.
In tune with the Gothic style, the house has a considerable amount of internal stone vaulting, which requires to resist its thrust the buttresses visible externally. The intended vaulting was not fitted in the Dining Room and Library, and these spaces remain open to roof level. Most parts of three floors and the cellar can be visited.
Parts of the house have sustained considerable water and frost damage since the 19th century, and the Woodchester Mansion Trust is attempting to carry out repairs and return the mansion to its 1870’s condition.
The mansion is of considerable interest, particularly to those interested in architecture. The NT estate offers long walks through woodland and past lakes.
Parking is at the NT car park by the road. Visitors to the mansion face either a 1 mile walk or a wait for the shuttle buggy. There is an entrance charge for the house. The lakes are another mile further on – that’s a 4 mile walk to see the lot on foot. On your return, watch out for the inconspicuous and unsigned steps up to the car park. 🙁 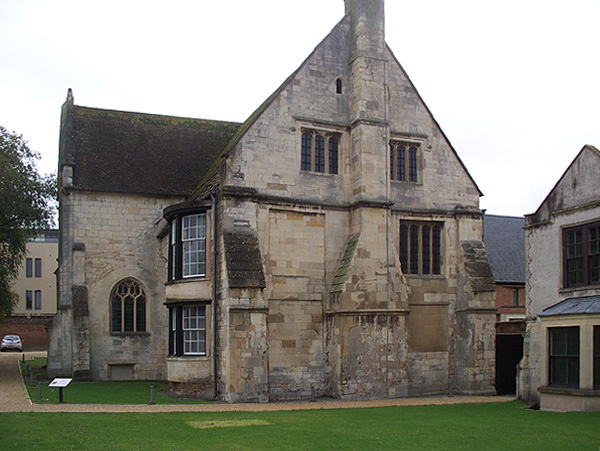 English Heritage
Remains of a Dominican friary, sited in the centre of Gloucester, and finished about 1270. After the dissolution of the monasteries, the church was shortened and converted into a Tudor mansion, and the outbuildings into a cloth factory. Later additions have been stripped away so that the medieval fabric is again visible. The site is managed by Gloucester Council who use the church for events.
The church interior is well worth a look, with its surviving stonework and arches, and the interesting roof. Also see the upstairs of the building (south range) on the other side of the courtyard, which is regarded as the oldest surviving purpose built library in the country. It has original roof beams and niches where the monks worked. Note the scissor-brace roofs.
Before travelling, check the EH website for the restricted opening times. Access October-March seems to be by appointment only.
With luck, using a satnav + postcode will take you to a car park outside the friary.