A Devon church included in ‘Devon’s 50 best Churches’ by Todd Gray.
St John the Baptist, Ashton SW Dartmoor.
A 15th century church with Perpendicular style windows. Roof, window tracery, floor etc restored 1881-3 and 1899-1901. Has a 5-bay Beerstone arcade and an important 8-bay roodscreen, paintings on west side of screen ‘the best in the county’.

St Nectan’s Church, Hartland.
The church is in the hamlet of Stoke, between Hartland village and the coast. It has a fine rood screen, painted ceilings and an interesting museum up a narrow flight of stairs. The museum has painted fragments from a painted ceiling and other relics.
The church has a tall tower that can be seen form some distance out to sea. 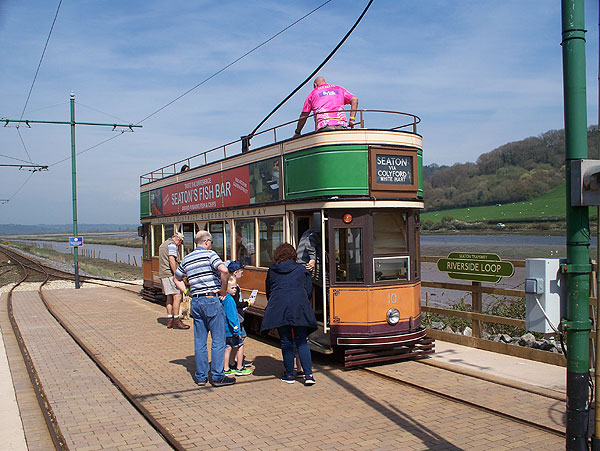 The Seaton Tramway is a 2 ft 9 in (838 mm) narrow gauge electric tramway which operates over part of the route of a former London & South Western Railway branch line to Seaton, Devon. The tram line was established in 1970 by Claude Lane.
The line runs from Colyton village to Seaton, with an intermediate stop at Colyford. Currently while the new station in Seaton is under construction, trams terminate at the Seaton Riverside depot, with onward travel by shuttle bus. As compensation for the shortened run, on the return from Seaton a conducted tour of the tram depot is currently included.

The tram ride is very enjoyable, as a top deck seat ensures views of the countryside and the riverside wetlands between Colyford and Seaton. Around a dozen trams may be seen at the tramshed. The tram service runs every half hour or so in season. There is free parking at Colyton station.
For the technically minded, the trams operate on 120 volts DC, fed from batteries which are trickle charged.
The village of Colyton is worth a visit, as is the old part of Seaton. 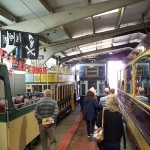 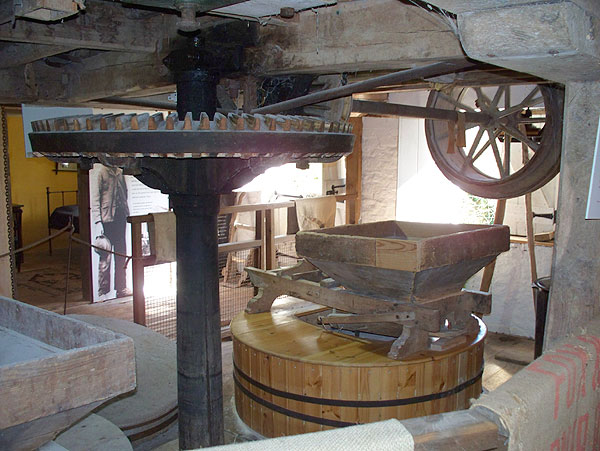 National Trust
Clyston Mill is an 18th century watermill on the outskirts of the village of Broadclyst. It has an undershot waterwheel, which drives gearing driving two sets of millstones. Visitors can access two floors and see the mechanism. The mill is still in working order and can grind corn into flour. Working is dependent on the level of the river, as flood levels prevent the undershot wheel from functioning.
It is possible to combine a visit here with a visit to Killerton House, several miles away. The Mill is well worth a visit if you are in the area.
On driving into the village you should see a discreet National Trust sign. This in fact leads to the village car park. Park here and look for the signage directing you by foot to the mill. There is an adequate trail of signage which leads you across the main street, past the church, across a meadow, through the grounds of a private house, to the mill. 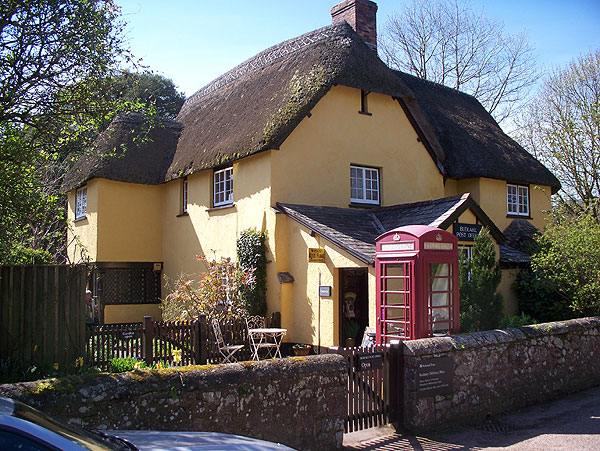 National Trust
The Old Post Office is part of the Killerton estate, and a visit to it can be combined with a visit to Killerton House and grounds (Q.V.)
The Old Post Office closed in the 1960’s and is housed in a thatched cottage about half a mile from the Killerton house car park. It is displayed as it might have looked in the 1960’s with period counter and packaged products. There is also a small cottage garden and outbuildings with a pigsty and (replica) pig.
Well worth a visit of about half an hour.
You can walk to the cottage from the house grounds – the footpath heads in the opposite direction to the house and crosses a road. It is also possible to drive there if you turn left out of the house car park exit and then first right at a small grassy triangle. There is limited parking on a loop road outside the cottage.
The cottage has its own postcode. 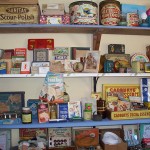 Privately Owned
Island Hall was built in the 1740’s as a riverside mansion. After some changes of ownership is was requisitioned during the Second World War and used by the WAAF and then the RAF’s Pathfinder Squadron. After the war, the local authority took over the house and grounds under the Emergency Housing Act, converting it into 15 bedsits and also using the Nissen huts in the garden. By 1977, a major fire in the south wing left the house in a very sorry state. In 1978 it was bought by Simon Herrtage, who carried out a programme of restoration.
The present owner, Christopher Vane Percy, bought the house in 1983. He is descended from the Baumgartens, one of the original owners. Percy and his wife Lady Linda have continued the restoration and created the mature gardens.

The gardens extend over three acres, including an island in the Ouse reached by a Chinese bridge (second replacement of the 18th century original). The gardens are mostly laid out as lawns, and are shaded by a number of mature trees including a fine cypress visible from various angles, and various stands of shrubbery. All the garden planting dates from after 1983.
The main house has the same frontage front and back. The rear entrance, leading into a double height staircase hall, was the main entrance at a time when most guests arrived by river. The room continues through to the front door. This hall is attractively decorated and has a plasterwork frieze (restored). It has a stone-flagged floor, a screen of Doric columns and a handsome carved oak staircase. In the north wing are two rooms with wood paneling. On the first floor to the front is a fine reception room, and the tour includes two bedrooms in the north wing. The interior and its contents have a most pleasing appearance throughout.
Though the mews house with cupola looks original it has in fact been substantially restored and the cupola is a replica.

I visited the house through the ‘Invitation to View’ scheme. The house is not identified on the street other than by its appearance (see photos). Entrance is via the yard to the left. There is a free car park about 100 yards away on the same side of the road. 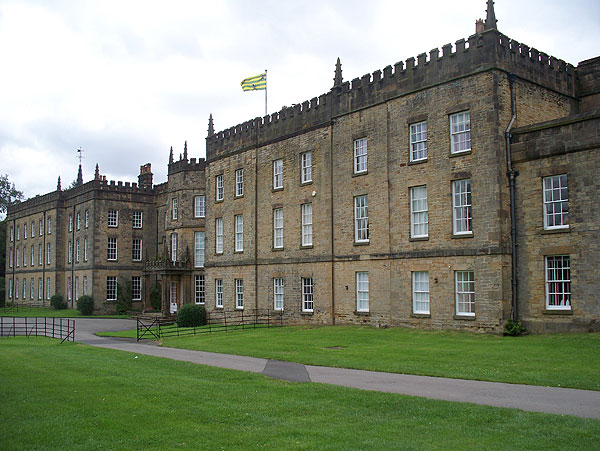 Privately Owned
Renishaw Hall was built by the Sitwell family. The core of the house was built in the 1620’s, and it was extended in stages from 1793 to 1806, adding a grand dining room, kitchen area, drawing room and ballroom wing. Minor changes were made in the 1890’s and 1908-9. The house now has a long, symmetrical north front in a somewhat Gothic style, with crenellations.
On the ground floor are various well-decorated and furnished rooms, the more notable being the dining room with semicircular apse, the Library, the long Drawing Room and the Ballroom. The Ballroom is currently furnished as a grand sitting room. The Old Kitchen is preserved with some early contents, but was not used as the main kitchen after the 1940’s. The contents of the house include some good furniture, and paintings by artists patronized by the Sitwells, as well as family portraits.
The old stable block has an exhibition room devoted to the three famous literary Sitwells, Dame Edith Sitwell, Osbert Sitwell and Sacheverell Sitwell.
The substantial gardens to the south of the house have formal gardens near the house and informal areas further away. A number of pieces of statuary stand in the gardens.
Access to the house is by conducted tour.

Privately Owned
Harlington Manor was built as a hall house, perhaps in the late 14th century, but was altered or extended in the 16th, 17th, 18th, 19th centuries and in 1937. Originally timber framed, it is now clad in brick. Internally it contains Tudor work, a late Restoration dining room, old fireplaces and some fine paneling. John Bunyan was interrogated and imprisoned here, and Charles II visited. There are some interesting contents. The house has pleasant gardens adjacent, and in the entrance yard stands a barn with some very old timbers.
The house is definitely worth a visit. I visited under the Invitation to View scheme, which includes tea and cakes, but you can also get Bed and Breakfast there.
The house is easy to find, as its boundary wall faces the war memorial at a crossroads in the middle of the village. 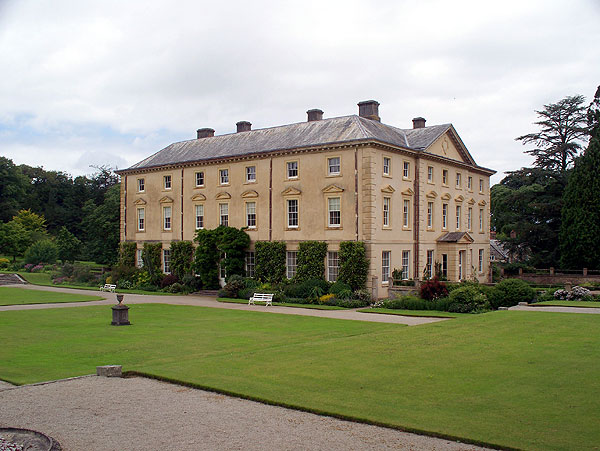 Private (HHA).
Pencarrow House and Gardens lie in countryside near Bodmin. The house lies at the end of a valley and was built in the 18th century. Internal alterations were made in the 19th and 20th Century. The Inner Hall contains a cantilevered staircase and a large stove with hidden flue. The tour includes the Music Room (so-called), Entrance hall, Drawing Room, Inner Hall, Pink Bedroom, Nursery, Corner Bedroom, Bathroom, Boudoir, back staircase, Dining Room and Anteroom.
The house remains a family home and contains many furnishings and contents of interest.
The extensive grounds contain a number of features of interest. A walk from the house to the lake via the gardens and returning along the entrance drive with its interesting tree planting takes about an hour. Note the rockery of Bodmin granite and the Mole’s Garden along the stream.