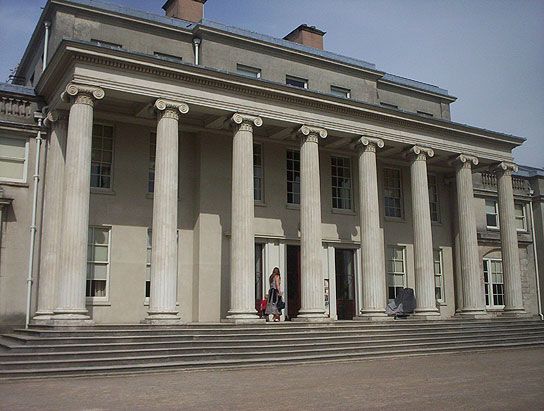 National Trust.
On a trip to Wales I could not resist temptation to follow the National Trust sign to Shugborough. Not such a great idea – it’s really an all-day destination, and too far from the M6 for a coffee stop. £3 fee for parking. 2 hours later, rejoined the M6.
There’s plenty to see and do – I just had a coffee and walked around the grounds. I managed to see almost all the Grade 1 listed garden monuments. The Hall has a columned portico, which looks impressive. There is also a courtyard with museums, and a walled garden. The size of the park is such that a shuttle service is laid on to transport visitors from the vicinity of the reception to the house.
Visitors should note that the estate is managed by Staffordshire County Council. Only the house and gardens are free to NT members.
In June 2013 I made a second visit – this time to the house only. The central section of the mansion was built in 1694 with the wings added in 1748. Further extensions were made in 1790-1806. The ground floor contains some fine interiors, also a number of interesting artefacts from China and elsewhere. The State Dining Room is one of the most impressive Rococo rooms in England, with a set of wall paintings of ruins, and an elaborate plasterwork ceiling. The Blue Drawing Room contains some significant china collected by George Anson, including a pair of very fine barrel seats, intended to be filled with pot-pourri. The Red Drawing Room contains fine furnishings including large mirrors and pier glasses.
Upstairs a number of rooms are being refitted to commemorate the connection of Lord Lichfield (Patrick Lichfield), the famous society photographer. Many examples of his photographs are on show as is some of his equipment.