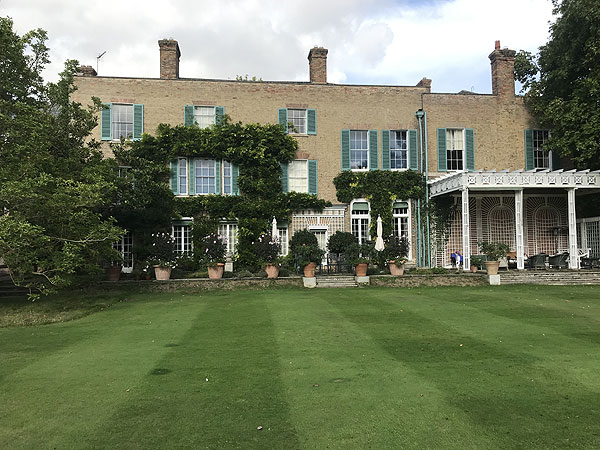 Privately Owned
I visited Abbots Ripton Hall under the Historic Houses Association’s “Invitation to View” scheme.
The Hall was built in the 18th century of red and gault brick, with a plain entrance front to the northeast and a garden front to the south-west, with shutters and loggia. The house was altered in the 1850s and again in the 1970s.
The house has some pleasant ground-floor rooms, including a library, containing some good furniture and pictures. The contents were mostly acquired by the current owner. The glory of the property however lies in the extensive gardens. A huge London Plane tree stands close to the house and is contemporary with it. A series of lawns and paths spread out from the house into wooded gardens containing a long double herbaceous border, a rose garden, a rose tunnel and pergola, and other features.
The Abbots Ripton Brook flows through the gardens, feeding a canal near the house, and a lake.
Many of the plants have numbered labels, and visitors are provided with a guide to the plants. I spotted one flower that was the same as a plant in my garden I had never been able to identify (Anemone).
A view across the lake provides a glimpse of a Chinese fishing pavilion (built by Peter Foster in the 1970s, like many of the garden features.)
The gardens in particular are well worth a visit. I would have liked to explore them further but one of our party was on an electric buggy which might have induced our host (Lord de Ramsey) to shorten the tour.
Finding the Hall, near Huntingdon, was straightforward except that my sat-nav took me to a commercial courtyard on the B1090. Exiting from there to the left, the inconspicuous gates to the Hall were about 100 yards further on to the SE, on the same side of the B1090. Hall Lane, shown on the maps, is the road behind the gates. Once one has actually visited the gardens, the main features are clearly identifiable on Google Satellite View.