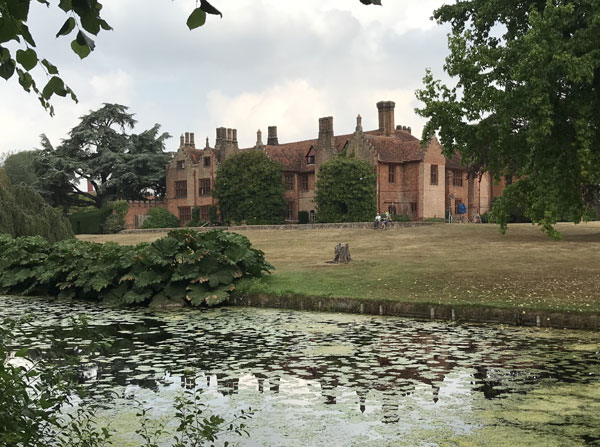 Private
I visited Ingatestone Hall under the Historic Houses Association’s “Invitation to View” scheme. The Hall is also opened to the public on selected dates.
At the dissolution of the monasteries, one William Petre, a lawyer from Devon, purchased a manor at Ingatestone that had belonged to Barking Abbey. Petre constructed a brick house that is substantially the same house we see today, still occupied by the Petre family.
Extensions were added at one side, incorporating two priest’s holes. In the 18th century the west wing, containing the Great Hall, was demolished, leaving the U-shaped plan we see today, and the windows and other features were ‘modernised’. The Petres moved to Thorndon Hall nearby and the house was subdivided into apartments.
In 1919 the Petre family moved back to the house and the 16th Lord’s widow immediately set about restoring the house to its original Tudor appearance and layout. This was a mammoth task, which was sympathetically carried out. Today it is hard to distinguish the original parts from the restored or reproduced features of the house.

The conducted tour was very informative. The house interiors and contents are generally in an Elizabethan or Jacobean style, and there are some pleasant grounds to explore. We were able to examine the priest holes.
During our visit a film crew was working in the house, filming an episode of ‘Horrible Histories’.
On approaching the area from the South, take care when leaving the A12, and follow the signage for the village rather than your satnav. My satnav sent me back onto a slip-road and a detour of many miles up the A12 and back.