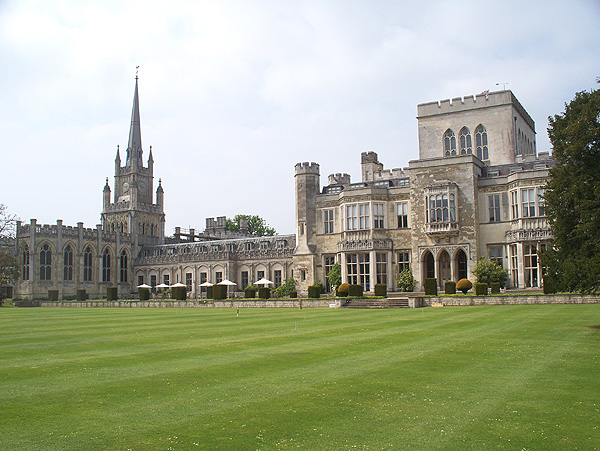 Private (business college)
Ashridge House is a grand mansion in Hertfordshire, built in the 19th century. Adjoining the house is a large private set of formal gardens and tree planting.
Please be aware that unlike the adjoining Ashridge Estate, the house and gardens are NOT owned by the National Trust.
The house was built between 1808 and 1822 in a neo-Gothic style, including a crenellated central tower and a prominent chapel with tower and spire. Inside are a series of magnificent rooms. The Entrance hall has a hammerbeam roof. The Main Hall under the tower rises to 29m (70ft) and has impressive fan vaulting and a series of statues. The cantilevered staircase has a cast iron balustrade with brass handrail.
The Hoskins Room, with a blue and white theme, has fine plasterwork. The Ante Room has high ceilings and much woodwork including three pairs of English oak doors. The Lady Marion Alford Room has a fine ceiling with a painting depicting the goddess Aurora, and twin marble fireplaces based on those in the Doge’s Palace, Venice. The Wyatt Room has oak paneling and an ornate plaster ceiling. The (former) Library has ebony bookcases with brass inlays in a Boulle style.
The Chapel, designed by James Wyatt, is a fine example of his work. It contains stained glass windows which are replicas of the original 16th century Bavarian stained glass. The originals were sold in 1928 for £27,000.
Under the Chapel is the Well House, which pre-dates the main house and contains a deep well sunk by the monks in the 13th century.
At least one of the outbuildings pre-dates the house, but the ‘Old Stables’ were built in 1817.
The house was built for the Egerton family, replacing an earlier house built on a monastic site. The house once belonged to Henry VIII and then Princess Elisabeth. The Egertons owned the house until 1849. Later owners the Brownlows sold it off in 1921. In later years it was a hospital, a Conservative Party training centre, a finishing school, and finally a management college and business school.

The gardens cover 77 hectares (190 acres) and include a formal Italian garden, and various other gardens and features as well as avenues of trees and open grassland. They are well worth a visit.

Visiting: The gardens are open on weekend and Bank Holiday afternoons during the summer, for a modest fee.

On a few dates in July and August, guided tours of the house and gardens are available. This is the only way of seeing inside the house. It is best to book by phone so you can ask what counts as a concession and what times the tours start, and whether you can go around the gardens on your own instead of paying for the garden tour (apparently not). Most visitors, it seems, book for both the house tour and the gardens tour that follows after complimentary refreshments.