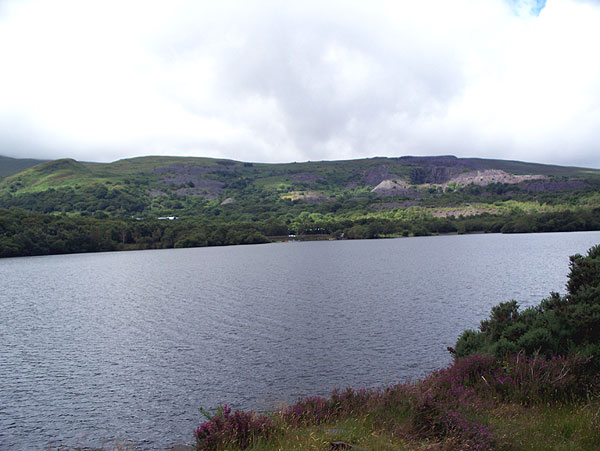 Llanberis lake area has a number of attractions, including the lake, the lakeside railway, the Snowdon mountain railway, Electric Mountain power station tour, Dolbadarn castle, and the slate museum. It is difficult to find anywhere to park around here where you won’t be charged for the privelege of supporting local tourism. If you park in the car park next to the principal narrow-gauge rail station and Slate Museum, you will also be within walking distance of the Dolbadarn Castle, the Visitor Centre for the Electric Mountain power station tours, and the terminus for the Snowdon railway.
If you are interested in civil engineering the power station visit is well worth while. They don’t like you to take cameras or mobile phones on the tour, and after the introductory film show the second stop is the lockers where you are directed to lock away the ‘banned’ items.
The narrow-gauge lakeside railway is more a mobile viewing platform than a means of transport, hence it does not stop at “all stations” as you might expect. (See their website). The published timetable shows trains starting from the principal station (Gilfach Ddu) by the Slate Museum, not the end of the line at Llanberis.

All the above are worth trying, depending on your interests and budget. Note that the Snowdon Mountain Railway is expensive, and if the weather at the summit is forecast clear, book ahead, as you probably will not be able to just turn up and go! The Slate Museum is free, but if you are trying to cram a lot into the day, note that while it closes at 5.00pm, sections of the site are being shut down from around 4.30 pm onwards.
The power station visit is recommended for those with an interest in Real Engineering – see the miles of access tunnels, the vast underground halls, the house-sized inlet valve, and the turbine festooned with hydraulic actuators and pipework. The plant can generate enough power to supply the whole of Wales.